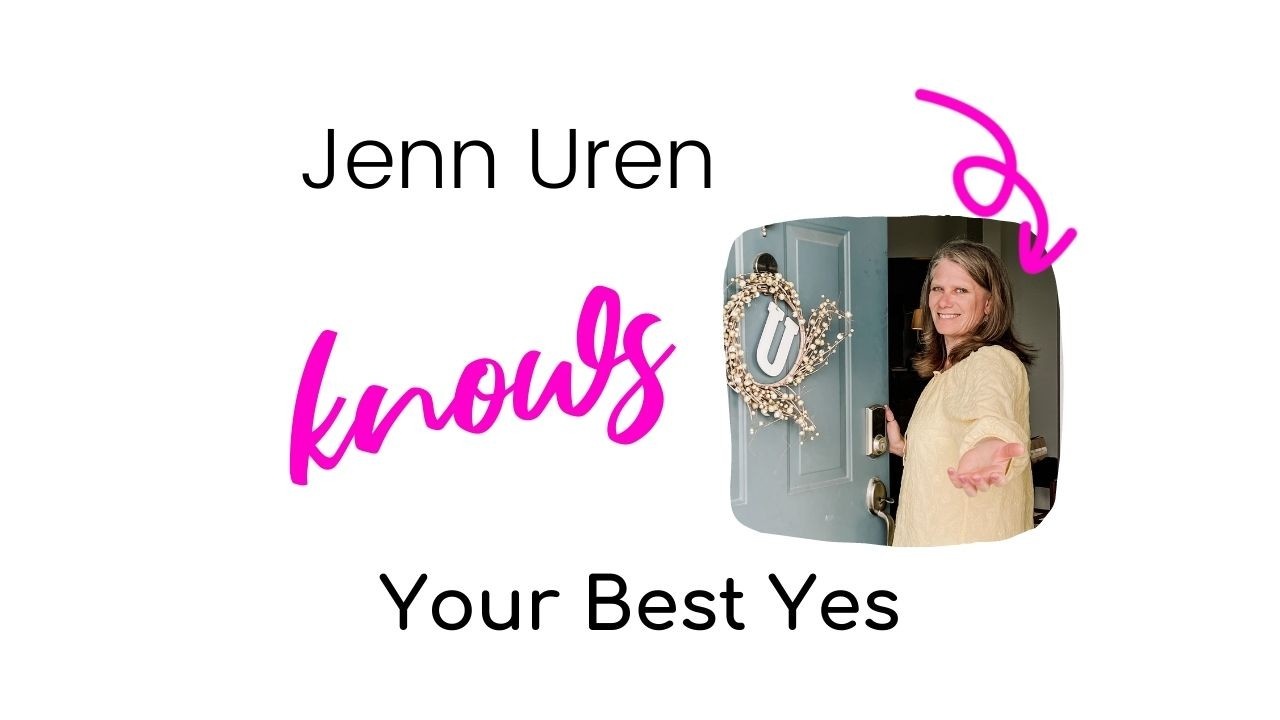 Jennifer Uren
Today, we're going to talk about something that can be hard to do. And that is learning how to say, yes. I know what you're thinking. "Now, wait a minute, Jenn. isn't saying, "no" what's hard to do? Isn't saying yes easy? And that's what gets us into trouble?"

Well, if you've heard my story of overwhelm, then you know that saying yes to everything is what got me into trouble. I had said yes, freely. I had said yes, indiscriminately. And I had said yes, without saying no. So you're right. Saying yes, is easy to do. But saying yes, to the right things can be hard to do. Because we have been taught to say good things need a yes and bad things are what we say no to. But not everything that is good, is right for us to do. And that's what we want to talk about today.

The first is that we actually need to learn to say no. "Oh, but Jenn, I don't want to disappoint anyone." Well, I totally understand. But did you know by saying yes to everything, eventually you're functioning as if you said no to all of it in the first place. There is a verse in the Bible that says, "Let your yes be yes. And your No, no." Now I'm sure that my application here is taking it out of context,but the principle is the same nonetheless. When we say yes to everything, and then drop the ball, it's as if we said No, only we didn't. We said yes. And so now we have not upheld our commitment.

When we say yes to everything, we watered down how much time and focus we can give to any one thing. And eventually we do such a poor job that it would have been better if we had said no in the first place, because at least then we would have honored our commitment. And the person that we were serving could have found somebody to say yes, and do it well. So practice saying no. Say no to that thing that you could do. But so could any number of other people say no to the things that you aren't qualified to do, but someone else is saying no to the things that you don't want to do, but other people love to do. But practice saying no.

The second thing that we need to do is name our priorities. What is a priority? Well, it's something that is important enough to give it a prime spot in your life. You might hear it referred to as the big rocks, which is a reference to an illustration using a jar, rocks, stones, sand, and water that shows how we can make time for all the things when we plan our time in the right order. But priorities is a vague general term. You could say that family is a priority, but that is hard to know how to work with. So you want to flesh it out a little bit.

I like to work with five main categories, faith, family, finances, fitness, and friendships. And then I nestle these under the umbrella of the future. The future is what we dream about doing, or if we could control the outcome, what we would want to see happen in the next year, five years, 10 years. In other words, these are kind of our goals. Taking each of those categories then, write out what is important within them. You're gonna discover that some of those things are not tied to future goals. For example, it might be important to you that you're at the bus stop each afternoon to meet your kid when they come home. This is a family priority that isn't directly tied to a goal but will have a deep impact on your kids nonetheless. Some of them are tied to goals, like take our family on a on an Alaska cruise, that's a family and a financial goal, it's going to require some thought, some effort, and some planning to make it happen. Doesn't really matter, though, as long as it is a priority to you.

And I just want to remind you that priorities are going to look very different to different people. So maybe travel is a priority for your family, where being involved in sports team is a priority for your neighbors family. Therefore, they don't get to travel very often, while your kids aren't playing sports. Neither is better or lesser actually, in and of itself. They just align differently for each of you. And one of the reasons this is important to do is because too often we confuse the urgent with priorities, and we fill our time with the wrong things crowding out the things that we really want to be there. And it happens when we aren't paying attention so by naming our priorities, we are now in a position to pay attention to all of these things.

The third thing that we want to do is practice the 80/20 rule. So what is the 80/20 rule? Well, it's a rule or principle that says we want to only fill something 80% of the way and leave about 20% of it empty. Why? So we have space. Think about your closet or dresser drawer. Now most of us will have one that is stuffed, like there is no space in it. It's hard to pull something out, it's almost impossible to fit something in. And it's easy to miss something that's there, because you can hardly see what you have. That closet or dresser drawer is at capacity and is not following the 80/20 rule. But when you take the time, and you purge it, whether whether you're going to find a new space for things or you're going to get rid of stuff, it doesn't really matter. But what matters is that you have restored balance. Now you can pull something out, put something away and see what you have. You created space, you created margin.

And it's just as true with our time. When we say yes to everything, our time becomes stuffed, it's hard to squeeze anything new in, find time for the things you're committed to, and it's easy to forget or overlook something. So part of learning to say no, is removing things from our plate so that we can create space or margin with our time.

So side note, let's talk about this plate for a minute. It's a good illustration when we use it personally. But it's a really tough one for comparison because we're not all using the same plate. Some of us have small dessert plates, and others of us have large serving plates. Some are flimsy paper plates that can't handle much and others are heavy duty ceramic plates that hold almost anything. Some of us don't like things to touch and others of us just pile it on. Oh yes. And keep in mind that different seasons of life are gonna lead leave us holding different plates. The new mompreneur may have a small dessert plate that is full while the seasoned mompreneur may now have a larger plate with more capacity. Or you may have a season where everything feels precariously piled on a paper plate. But it's not forever, things can change. So take a minute to understand what kind of plate you're holding. And this is going to help you as you decide which things to remove from it to create space to create that margin, but actually do take the time to decide what stays and what goes. And remember delegating it or outsourcing it is an option. Kind of like we just talked a minute ago about it didn't matter when you took things out of that drawer, whether you found a new place for them, or you got rid of them. That's what we're talking about here. You can find a new place, delegate it, put it on someone else's plate, or you can just get rid of it and stop doing it altogether.

The fourth thing that we want to do is say yes within these parameters. So what you've done now is you've given yourself a mental flowchart of sorts to help you before you say yes. Before you say yes, give yourself time. Ask for a deadline for your answer. Now we do it naturally when we sit down at a restaurant, we don't even give it a second thought. The waitress or waiter comes over and says, "Are you ready? And we say, I'm not quite ready to order. Could you please come back in a minute?" It's the same thing here. "I'm not quite ready to give you an answer. Could I please get back to you tomorrow? Friday? Next week?" Then take some time to work it through your new mental flowchart.

Is this something that I want to say no to? And are my reasons for saying no legitimate? Or are they based in fear? Because if they're in based in fear, like, I could never do that, that's too scary. It might be worth noodling on it some more. But if it just clearly does not fit, you don't enjoy it, you just don't want to do it, then you have your answer.

But maybe you're not ready to say no. Take a minute and see if it fits with your priorities and goals. Is there a clear connection? If not, or if it would actually impede things, then you have your answer. But if it does fit, keep going through the filter here. Now think about your plate, and the 80/20 rule. Do you have capacity to say yes? Will it bleed into the space or the margin that you've given yourself? And so here's where you have to ask yourself an even harder question, "am I willing to remove something from my plate to make room for this new thing?"

So again, I hear you you're saying, "well this is great, but it sounds easier said than done." Well, I have you covered I have created the your best yes filter. This resource will help you map out your priorities, recognize the size of your plate and help you create your own filter to pass things through before you say yes to the best and no to the rest. So hop on over to ThisMomKnows.com/Yes and download your copy there. 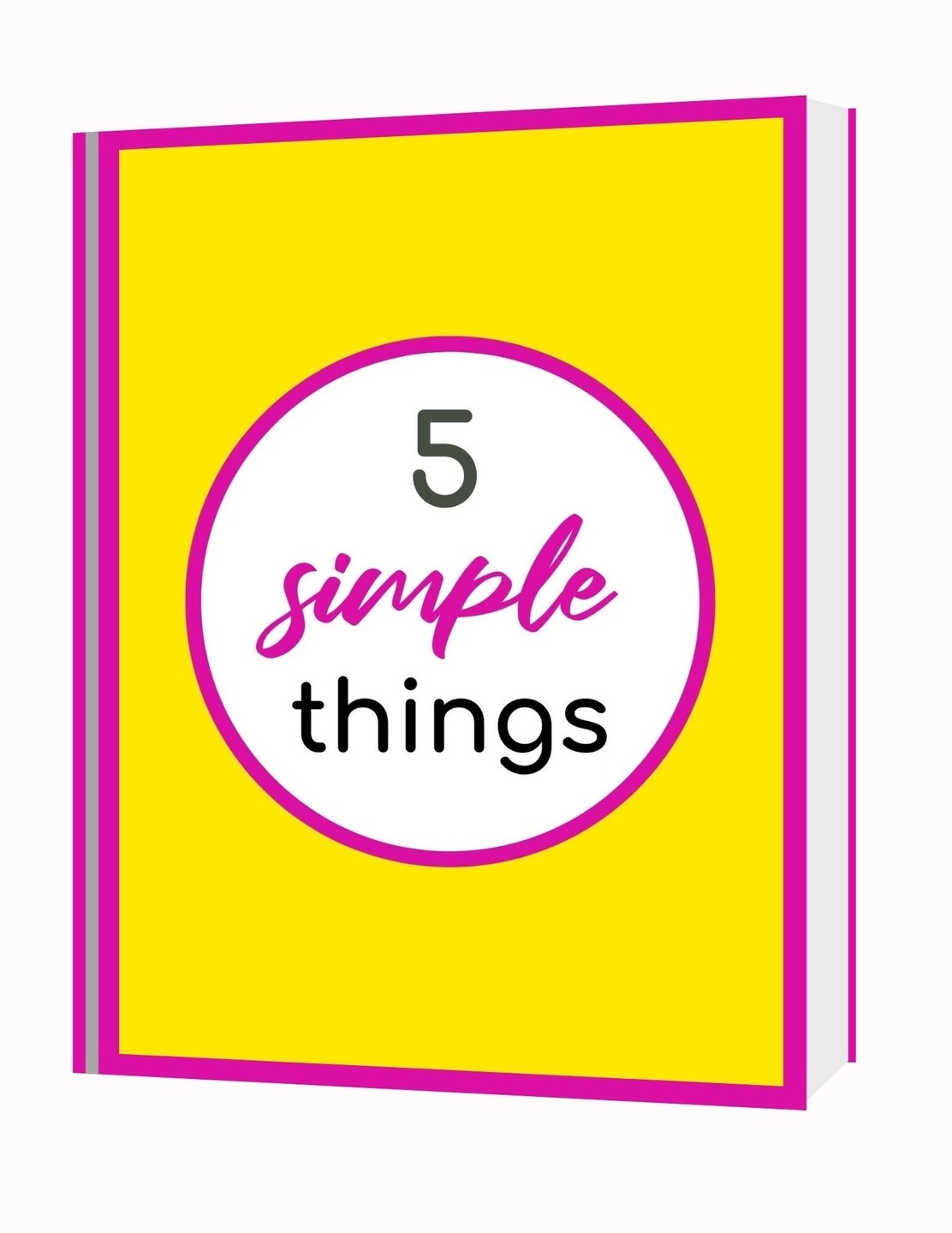